The FBI issued a horrifying warning to frequent grocery shoppers, I can’t believe this! Every American needs to see this!

After one young man’s unthinkable actions, washing your fresh fruits and vegetables has never been more important.

Reports have now confirmed our worst fears, as cameras captured one young man visiting several grocery stores with the sole intent of spraying a poisonous mixture on open food throughout their produce sections.

The young man was apprehended, and later confessed to authorities that the horrifying mixture consisted of mouse poison, hand sanitizer and water. The unnamed man now faces four felony counts of poisoning food and drink.

About 15 stores — including a Whole Foods Market and a Kroger — in Ann Arbor, Flint, Midland, Birch Run and Saline, Michigan, may have been targeted, according to the Washtenaw County Public Health Department. Targeted stores promptly disposed their produce and all fresh food bars were shut down immediately. 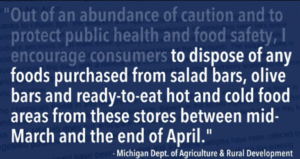 The FBI has issued a warning about going to the grocery store, and advises consumers to dispose all foods recently purchased from salad bars.

“While the risk for adverse health effects appears to be low, more investigation is being done to determine what level of exposure may have occurred,” said Dr. Eden Wells, chief medical executive for the Michigan Department of Health and Human Services.

Thank God they caught this guy, I just can’t imagine why anyone would want to do such a horrific thing! 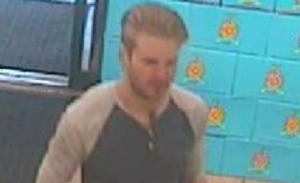 Please remember to always wash and rinse any store-bought produce!

Put your store-bought fruit and veggies in a sink filled with ice-cold water.
Squeeze 1/2 a Lemon into the sink.
Add 1 tablespoon of Salt.
Add a splash of Apple Cider Vinegar.
Soak for 15 minutes.